A Taste Of The Silk Road

A TASTE OF THE SILK ROAD (ALMATY – MOSCOW)

Retracing one of the most important trading routes of ancient civilisation, the Silk Road follows in the footsteps of such legendary figures as Alexander the Great and Marco Polo. For centuries, merchants and adventurers journeyed to and from China on ancient routes through some of the most testing landscapes in the world trading silk, spices and perfumes. These ‘highways’ – stretching some 4,000 miles (6,400 km) – collectively came to be called the ‘Silk Road’. 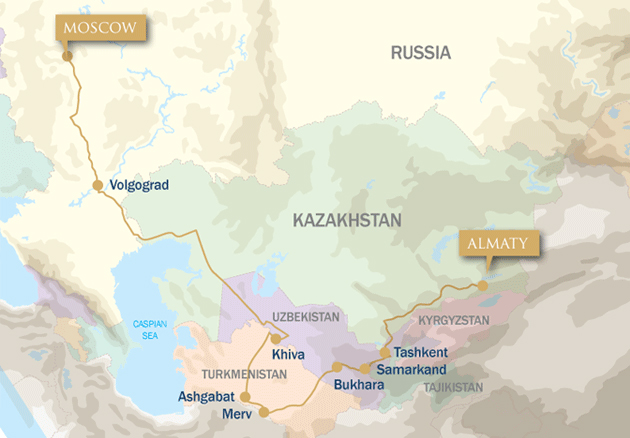 Upon arrival at Almaty Airport, you are met and transferred to the InterContinental hotel, a luxury 5-star hotel located opposite the Presidential Palace in Almaty’s Republic Square for a one night stay. The hotel features spacious rooms, free WiFi, an indoor pool and beautiful views of the Tian Shan Mountains.

Almaty is the largest city in Kazakhstan and is notable for its wide tree-lined boulevards. Surrounded by the majesty of the Tien Shan Mountains, this beautifully verdant city derives its name from ‘alma’ meaning ‘apple’. Just a short distance from the city, apple orchards thrive in abundance.

Our city tour includes a visit to Panfilov Park where we have the opportunity to visit the Zenkhov Cathedral which was built entirely of wood. We’ll also go out of the city to the Chimbulak resort, where a cable car ride will give you spectacular views of Almaty and the mountains.

Tashkent is the capital city of Uzbekistan and we spend time touring this modern Soviet-style city which was rebuilt following the devastating earthquake of 1966. Our tour of the city includes the Old Town, where traditional homes and religious buildings line the narrow streets and here in a small library we’ll be privileged to see one of Islam’s most sacred relics – the world’s oldest Koran. This is followed by a visit to the Railway Museum and the Museum of Applied Arts.

Just the mention of Samarkand instantly conjures up evocative images of the Silk Road, more so than any other town. Founded in the 6th Century BC, Samarkand’s stunning architecture hints at its former status as one of the most important cities in Asia and is particularly noted for its architectural remains from the 14th to the 17th Century, when it flourished as the fabled capital of the Mongol empire of Timur and his successors.

Today we will visit some of its most significant sites including Registan Square, the refined elegance of the beautifully proportioned Bibi Khanum Mosque and the Ulag Beg observatory, one of the earliest Islamic astronomical observatories built in 1428. Before dinner we will return to the now illuminated and awe-inspiring Registan Square.

Bukhara is quite simply outstanding. Like Khiva, UNESCO sponsored the renovation of much of the city for its 2,500th anniversary in 1999. The highlight of this wonderful tour is a visit to The Ark, a fortified residence of the Emirs of Bukhara – the despotic and ruthless leaders who ruled until Soviet times.

We then travel out of the city to experience the Emir’s enchantingly named, Palace of the Moon and Stars. This evening, weather and time permitting, we will enjoy a barbecue on the station platform before our train departs

From the station at nearby Mary we transfer to the ancient and mainly unrestored remains of Merv. Once an important stopping point on the Silk Road, it claims to have briefly been the largest city in the world during the 12th Century.

1794 saw the demise of Merv, after the Emir of Bukhara destroyed the dam which the population depended on for its water.

The Golden Eagle makes a brief scheduled stop at Ichoguz, where we have the option to leave the train and make a short journey to Darvaza’s famous burning gas crater, a spectacular sight best seen at night. Located in the middle of the Kara Kum desert where the area is rich in natural gas, the 70-metre wide crater is known by the locals as the ‘Door to Hell’ and has been burning for over 40 years. A unique experience that is not to be missed.

The capital of Turkmenistan is known as the ‘Las Vegas of the Kara Kum’. Situated between the Kara Kum desert and the Kopet Dag mountain range, Ashgabat is a relatively modern city built upon the ruins of the Silk Road city of Konjikala and the Soviet city built after the devastating earthquake of 1948. The city’s extravagant fountains, golden domes and towering modern buildings appear strangely incongruous in this desert setting. Highlights on our visit include a trip to the National Museum and Kipchak Mosque.

From Urgench we travel to the ancient city of Khiva, founded 2,500 years ago. As one of the Silk Road’s most important trading posts and now a World Heritage Site, it lies at the crossroads of the routes between Mongolia, Russia, China and Persia.

A truly magnificent sight to behold, it rises out of the desert to reveal a wealth of impressive architecture. Stepping back in time, we discover its impressive mosques, madrassas, bazaars and minarets within Khiva’s ancient walls.

Today, we enjoy a relaxing day on board as we travel across the vast expanses of Kazakhstan towards Russia.

As well as experiencing the unique landscape, we can take the opportunity to chat to fellow passengers and maybe take a Russian language lesson.

Standing on the banks of the Volga, Stalingrad, as the city was known in Soviet times, was the dramatic scene of one of the most important Second World War battles. The Russians heroically turned back the Nazi advance here to alter the course of the war. We visit the poignantly sobering Mamayev Kurgan war memorial, followed by an informative museum visit.

Having travelled from Almaty we arrive into Moscow, our final destination.

Included in our time spent in Moscow is two nights at the stylish five-star Four Seasons Hotel Moscow. Located in the historic building of Moskva Hotel and occupying one of the most enviable addresses in the very heart of Moscow, the hotel is a short walk from the Kremlin, Red Square and the Bolshoi Theatre.

Our touring programme of Moscow principally takes us to the grandeur of the Kremlin – the spiritual, historical and political heart of Moscow – and to see the treasures of the Tsars in the Armoury Chamber. We also visit Red Square, an iconic symbol of Russia’s former military and political might with its eclectic mix of fascinating architecture, such as the ornate St Basil’s Cathedral’s magnificent onion-domed spires, the beautiful facade of the world famous GUM department store, constructed in Tsarist times, and the sombre and evocative site of Lenin’s tomb.

With our Freedom of Choice touring option you may instead wish to travel out of the city centre to Sergiev Posad, home to one of the most beautiful monasteries in Russia and the historical and spiritual centre of the Russian Orthodox Church or visit the famous State Tretyakov Gallery (National Museum of Fine Art).

Why not extend your stay in Moscow with additional nights to explore more of the city at your leisure or have time to take in a performance at the world-renowned Bolshoi Theatre? Tickets need to be pre-booked and are subject to schedule and availability.

After breakfast, transfer to Moscow Airport for your onward flight home.

TOUR INCLUDES
As far as possible our tours are all inclusive with no hidden extras. What follows are those elements which are included in the tour price. The only extra items you will need to budget for include personal expenses such as international and internal flights, visa costs, travel insurance, drinks from the Bar Lounge Car and laundry.

EXPERIENCED TOUR MANAGERS
Our experienced tour managers and their assistants are selected for their travel knowledge and organisational abilities allowing you to relax and enjoy your voyage of a lifetime. We receive many exceptional passenger comments about our Tour Managers and their aim is to ensure you enjoy every minute of your holiday.

ARRIVAL AND DEPARTURE TRANSFERS
Arrival and departure transfers are included.

HOTEL AND ONBOARD ACCOMMODATION
Although you will spend much of your time sightseeing or relaxing in the train’s public areas, you will find you hotel room or cabin a welcome retreat at the end of a rewarding day. Hotel and onboard accommodation as described in your individual tour itinerary are included in the tour price. All hotels are of 5 star standard or, in certain locations, the best available. Room upgrades are available on request and at extra cost.

WELCOME AND FAREWELL DINNERS
Each tour begins with a Welcome Dinner, an ideal opportunity to get to know your fellow passengers; for the Tour Manager to brief you on the trip; and introduce you to the Golden Eagle Luxury Trains team and the Tour Doctor. The Farewell Dinner is the perfect end to your adventure by private train where you can relive the journey and look ahead to future tours.

ROUTE GUIDE, ITINERARY AND INFORMATION PACK
When you board the train there will be a brochure in your cabin detailing more about your journey and the places en-route. Our Tour Manager will organise a programme of briefings on the cities or places we visit and, each evening, will issue a programme for the next day’s touring schedule.

BREAKFAST, LUNCH AND DINNER DAILY
All departures feature one or two uniquely designed restaurant cars where you can enjoy the excellent waiter-served food and wine. Several times during the tour we will also sample authentic local cuisine off the train.

DRINKS WITH MEALS
All meals with wines at lunch and dinner except in Iran where soft drinks and non-alcoholic beer will be available. Drinks from the Bar Car are also included with the exception of drinks from the Premium Wine List.

ON BOARD SERVICE
Throughout your tour you can expect service which is attentive, friendly and unintrusive. The high ratio of staff to passengers means there is always someone available should you need assistance.

GUIDED OFF-TRAIN EXCURSIONS
All our tours include a wide-ranging sightseeing schedule to make the most of the time you have off the train and bring you closer to the culture, people and history of your destinations.

PERSONAL HEADSETS
On all the off–train excursions, to enhance your enjoyment and comprehension of the places you visit, you will be provided with a lightweight personal headset on which to listen to your tour guide as you take in the sights. So you do not need to worry about missing any of the interesting details on your excursions.

ON BOARD DOCTOR AND MEDICAL FACILITIES
To give you peace of mind our tours are accompanied by a doctor who travels with us for the entire journey; so you can rest assured that medical assistance is always available. On call 24 hours a day, the doctor is on hand to give primary care as required. Normally, the doctor will be English speaking and be registered with the General Medical Council in the UK.

PORTERAGE
Porterage is included between the hotels and stations.

ALL GRATUITIES
All gratuities are included in the tour price.

All prices are per person and in US dollars. We charge in Australian dollars based on the prevailing rate of exchange at time of payment.  Prices do not include international flights. For a complete list of tour inclusions see the inclusions tab above.

All prices are per person and in US dollars. We charge in Australian dollars based on the prevailing rate of exchange at time of payment.  Prices do not include international flights. For a complete list of tour inclusions see the inclusions tab above.